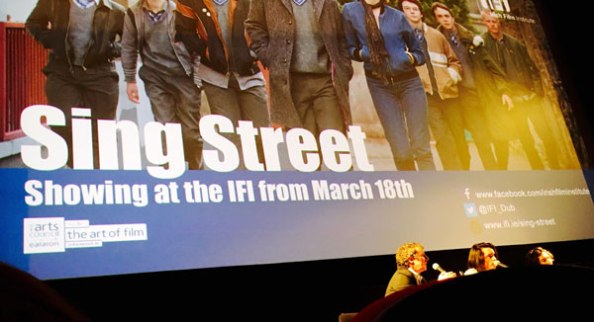 Fittingly released on St Patrick’s Day, John Carney’s Sing Street has extended this triumphant year for Irish film. Following in the footsteps of Oscar-nominated Irish works such as Room and Brooklyn, Sing Street is sure to cement Ireland’s unique position of a little country with big ideas. After two standing ovations and rave reviews at the Sundance Film Festival in January, two of the cast members – 16-year-old Ferdia Walsh-Peelo and Mark McKenna – were on hand to lead the Q&A at the IFI on Friday, Ma

rch 18th. Produced by the Weinstein Company and with a US release of April 14th, the boys’ press junket was only just the beginning of a well-deserved adventure for a stellar Irish film.

Ferdia Walsh-Peelo’s character is the youngest in an upper-class family in 1980s Dublin. The Lawlor’s have found themselves locked in bitter domestic rows and financial woes. Eventually they decide to alleviate this dilemma in the ultimate cost-cutting sacrifice – the relocation of their youngest from his private Jesuit institute to a rough-and-tumble Christian Brothers school. Reluctantly, he begins classes at Synge Street. A name like Conor Lawlor doesn’t slip by unnoticed with its unfortunate overloading of vowels, and when he introduces himself during roll call the South Dublin accent only escalates the ridicule and isolation. Jack Reynor excels in dispensing advice as the brash, but Yoda-like, Brendan, Conor’s older brother. His full-time occupation as a college dropout leaves him with infinite hours from which to artfully sculpt his younger brother’s music taste as they drool over the creme de la creme of 1980s television, Top of the Pops. When Conor spots Raphina (Lucy Boynton), the elusive model, on a set of Georgian steps, he’s resolved to have her appear in one of his band’s music videos. After an impromptu a cappella to prove his validity, Raphina relents and the plan is set in motion – now Conor just needs to start a band.

An eclectic accumulation of characters emerges from the recruitment process (“Dya want to be in a band?” “Yeah” “Cool”). Mark McKenna is excellent as the stolid and understated Eamon, the Garfunkel of the lead duo. From a crop of kids where most don’t look a day older than their first holy communion, a talented Irish ensemble cast assembles. Clumsy hairstyles, dodgy makeup and fashion faux-pass-it-on become the cornerstone of the band’s image. With a directionless appearance but vague idea of song choices and a good handle of lyrics, we witness the inept but sweet formation of adolescents resolved in their quest to create something special.

The second half slips into a more serious dynamic to accelerate the plot, leaving most of the humour in the first half. The superb supporting cast comprised of talented Irish youngsters are left in the dark. A bridging scene where the band get together for one last rehearsal would have been just enough to cement the comedic thread. Without a doubt some longing, pensive glances linger far too long and a number of sequences fall victim to unwarranted soppiness. While fairy tale and dream sequences take hold regularly, it quickly becomes apparent that Sing Street just has to be viewed from a romanticised perspective.

Sing Street really was a case of being in the right place at the right time for the young Ferdia, who was cast by director John Carney at the age of 14. However, with virtually no prior acting experience, the Wicklow native fearlessly leads the film simply by being himself. Both Ferdia and Mark emphasized John Carney’s philosophy, prompting the youngsters to simply be teenagers. “John didn’t want me to act”, Ferdia maintained, insisting that that element made them feel like they really were “just teenagers starting a shitty band”. Following a string of amateur music videos in back alleys and on Dun Laoghaire pier, Conor heads the pack of misfits, reincarnated as lead singer, Cosmo. Their overall perennial determination to beat the institution and perform at the end of term disco, coupled with Cosmo’s unbridled affection for the flighty Raphina makes for a great platform to witness a crowd of youngsters blundering their way through life.

It is such a rarity these days when a film truly lives up to its trailer. Sing Street’s original songs are its competitive advantage. On a scale of catchiness, the musical numbers trump Grease, developing its own unique caliber. While not exactly a total eclipse of The Commitments, it makes a fair stab at it. By all accounts, Sing Street has been fantastically received in the US where it premiered at the Sundance Film Festival in January. “The Americans just loved it”, Ferdia and Mark nod vehemently in unison as they fondly recall their memories of the Utah festival. Tom Dunne questions the boys on their newfound fame and celebrity pals, with Ferdia admitting to having sat next to Sting for the premiere, where he reported that The Police frontman had for some reason, shed a tear during one of the musical numbers.

An alum of Synge Street himself, John Carney described this story simply as “a kid on a guitar with a bike” and as a semi-autobiographical homage to his own upbringing, he manages to acutely capture the spirit of youthful disposition. The perms and shag carpets, the tight humour and Dublin deliverance prop up Carney’s Sing Street as a masterful ode to a particular time, to our fair city, to music and to pure “chancers”.