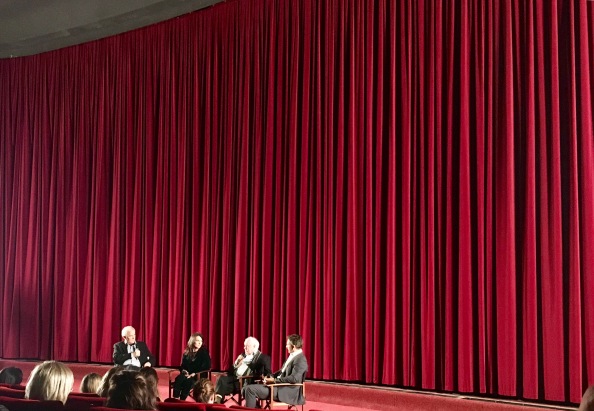 The beginning of the Audi Dublin International Film Festival (ADIFF), saw the Savoy’s red carpet dusted off and rolled out onto O’Connell St on Saturday night for guests and stars to attend the Irish premiere of The Secret Scripture, Jim Sheridan’s latest directorial work has been a long awaited return to his homeland’s material, with this being his first Irish offering in the best part of 20 years. Among the revellers in attendance were stars of the film, Australian actor Eric Bana, Susan Lynch and Sheridan himself. All three partook in a Q&A following the screening, but not before introducing the film to a roar of cheers and whistles, to which Sheridan quipped “I didn’t know Eric Bana was that popular.”

As the credits rolled familiar names and character alter-egos surfaced: Pauline McLynn and Tom Vaughan Lawlor make crucial, albeit extremely minute appearances. Sheridan himself is credited as co-writer of the screenplay based on the novel of the same name by Sebastian Barry. The Secret Scripture documents a woman’s final hours in a Sligo psychiatric hospital which is moving to another premises, an environment she has inhabited for 40 years.

Vanessa Redgrave is the institutionalized Rose McNulty, desperately clinging to her bible where she has clandestinely recorded her thoughts over the years amidst the scripture. Scrawlings of “I did not kill my baby” rest in the margins and in between prose. Eric Bana is called in as Dr. Grene to assess Rose’s state of mind, in the absence of any family members to help relocate her. Susan Lynch and Bana remain as nurse and doctor at her bedside as she recounts her life that confined her to this hospital. From this point, intermittent flashbacks to 1940s Ireland guide the story with Rooney Mara portraying the young Rose.

Mara proves a dab hand at the Irish accent, slotting into the suppressed landscape of old Ireland quite smoothly. Having just moved from Belfast to her mother’s town of Ballyterbin, an aunt sets her up as a waitress in the family’s cafe. Rose strikes up a relationship with Michael McNulty (Jack Reynor), known to be imminently heading to war as a fighter pilot. In addition to this, a sinister dynamic with the local priest ensues, however accompanied with little context. Both lines of enquiry between the two men pursuing Rose, are quickly scuppered by none other than Tom Vaughan Lawlor (Nidge from Love/Hate) and his gang, threatening Rose to ditch the priest and the British soldier. Brash, Republican intimidations are made with the weapon of choice, a hurley. It’s not that Rose deliberately goes after trouble or hardship, but it seems to always find her. The story aptly demonstrates the vices of a small parish, with scorned individuals undermining the flourishing of youth that had kept Ireland in the dark for so long.

The Secret Scripture’s cast is impeccable, an ensemble of Ireland’s most talented and loyal outsiders such as Mara and Bana who act with pitch perfect dialects – there’s no trace of a Julia Roberts butchered Kerry accent here. The flashbacks, that can pose continuity errors for many directors are fluidly interwoven, the scrawled scripture peppered against Sheridan’s fleeting camera movements. The two stories are told in parallel, Rooney Mara as young Rose sets us up to decipher the truth behind how she was institutionalised, however like parallel tracks, they never quite meet the way you would anticipate. Vanessa Redgrave is alluring, her piercing blue eyes gaze directly down the barrel of the camera, her face haunted by flashbacks of her past. Equally so, Rooney Mara gives a fantastic performance. Small, mundane details however, that could have been altered with preparation are grating, such as Mara’s dark green eyes contrast unnaturally against her characters older self with Redgrave’s aforementioned blue eyes.

This is not to discredit Sheridan, a beautiful and masterful storyteller. It appears that he may have been a victim of the material, bound to such a linear, predictable storyline. The present day scenes have far more soul and nuance than the period flashback, ironically the latter of which took far longer to shoot. Sheridan flourishes in those moments when the witty Irish repartee and discourse of which he made his name comes on screen. A stellar cast which only amplifies Ireland’s exemplary talent elevates Sheridan’s material.

After the screening, Sheridan touched on his time spent filming. His directorial process is clearly something to behold, as Sheridan erratically puts it “Sometim
es we were doing a scene sometimes not. Like a high wire act, we shot mad stuff, 15 to 20 scenes more than what was in the script.” Neither Bana nor Lynch had a problem with Sheridan’s high-wire approach. Lynch in particular joked about one occasion where Sheridan lived up to his opportunistic name. Preparing for one of the emotional scenes, Lynch had just got off the phone with her son who’s bedtime she had missed due to filming. She recounts how she bursts into tears and Sheridan sprung into action, “Quick, quick, roll the fucking camera.” In a wispy voice, Sheridan responds, “Well, I wasn’t going to miss an opportunity.”

The Q&A wrapped, complete with Sheridan’s own Trump impression that could rival Alec Baldwin any night of the week. The Secret Scripture is still a must-see despite it’s minor flaws, an aching portrayal of old Ireland’s tendency to brush troubles under the rug instead of facing it head on, should be enough of a plug as any.