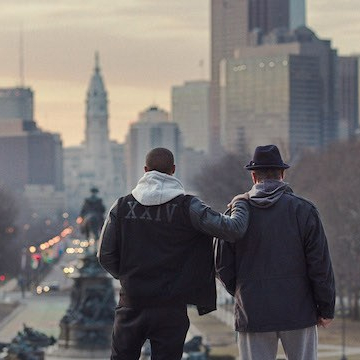 Still reeling from the political turmoil following the Watergate Scandal and the repercussions of the Vietnam War, America in 1976 was suffering from a punctured and disenchanted spirit. The US desperately needed a hero. Against all odds, a brooding Italian Stallion served as a national antidote and worldwide pick-me-up. The trials and tribulations of a sentimental fighter, resonated with, and astounded the masses. Rocky, against all odds won the Best Picture Oscar for 1976, beating exceptional opponents such as the iconic Taxi Driver, and the politically relevant All The President’s Men.

Yet each subsequent film in the Rocky franchise brought its own subsidiary degree of degradation, to such an extent that it gradually tarnished the essence and vigour of the original. Disappointingly, it became a parody of itself, Sylvester Stallone unrelenting in his dubious quest to squeeze and exhaust the franchise to the point of depletion. Audiences therefore, could be forgiven for approaching the Creed franchise with justifiable trepidation. However, Ryan Coogler’s direction from the original Creed (2015) deserved adulation for successfully bringing the story back to its roots. The recent release of the second instalment warrants a reexamining of the rejuvenated franchise.

Creed tells the story of a young Adonis Creed, the lovechild of Rocky’s nemesis, Apollo Creed. We first meet him wreaking havoc in a Juvenile Correctional facility, before being rescued by his father’s widow, and the young Adonis is catapulted into a world of wealth and extravagance. Michael B. Jordan commendably internalises the anguished struggles of Adonis, accurately displaying the truth of youthful resolution and determination in how a boxer hears what he wants to hear and disregards the rest. Despite harrowing pleas from his father’s widow he abruptly uproots himself from the opulent confines of Los Angeles, setting his sights on Philly. The Creed mansion’s electric gates and Gatsby-esque extravagance, give way to his drab studio apartment in the heart of Philadelphia. Like his father before him, Adonis Creed seeks out Philadelphia’s golden boy, Rocky.

Stallone already looks defeated, with those infamously wandering, but seeing eyes. Adonis, in hot pursuit of a trainer adopts the role of a persistent ‘woodpecker’, desperate for Rocky’s guidance. Stallone eventually relents, and crosses the ring into Creed’s corner as a mentor. A gruelling training regime begins and the inevitable montage follows, superbly handled by Coogler’s direction. Adonis sprints through the bruised and battered streets of Philadelphia, followed by an army of mopeds and quad bikes cheering him on from their chariots. The sequence is accompanied by a modernised remix of Rocky’s original score. Michael B. Jordan shakes up the franchise, withdrawing from Rocky’s seventies persona with grey sweatpants and frantic, flailing arm movements towards the embodiment of a fully-fledged Nike athlete.

While Scorsese’s Raging Bull articulates the artistic depiction of boxing, Creed’s ringside portrayal gracefully balances art with gripping reality. Single steadi-cam shots command the discourse throughout matches. The elongated shots illuminate Ryan Coogler’s impeccable coordination and visionary standpoint, acting like a third eye within the ring. Michael B. Jordan is outstanding as a tortured young fighter, taking on the role within an over-extended franchise, with unflinching tenacity.

Perhaps it’s the inconspicuous weaving of modernisation into an historic story that propels Creed into its greatness. Or perhaps the acclaim lies with the spark of Coogler and Covington’s work on the screenplay, the first in the series left untouched by Sylvester Stallone. While hearty references to the original prevail (Cherished turtles in their tanks and stern warnings that ‘women weaken legs’), it manages to strike the optimum balance of allegiance to the original, with deviation which allows for the incorporation of new ideas.

For the most part, Creed 2 is left in capable hands with Stephen Caple Jr. taking on the latest instalment of the acclaimed franchise. We meet Adonis in a new phase of his life, having proposed to Bianca and awaiting the birth of their first child. Having recently been crowned the world heavyweight champion, a snarling Russian by the name of Viktor Drago challenges Adonis to a fight. After this initial meeting, Adonis is reeling from his loss to Ivan Drago’s son, spiralling into depression. Ultimately Caple Jr. manages the character arc well; while his predecessor had the pleasure of working with an underdog, he successfully portrays the struggles of a bruised, but valiant winner clawing his way back up the rungs of the ladder.

As had been the case in Creed, commentary from American news anchors dictate the dialogue of the fight sequences. The brash commentary is a regular occurence, becoming draining and tiresome, and succeeds only in cheapening the atmosphere. Caple Jr.s exquisite, gritty aesthetic suffer from the juxtaposition of these corporate, consumerist sequences.

One of the most modernised aspects of Creed, was the use of Adonis’s love interest as a companion, with her own vocation and personal struggles as a musician. It was a hint at the elapse of time and developments that have occurred since Rocky’s love. His Adrian, as simply the wife and the sidekick, is revolutionised in Adonis’s girlfriend, Bianca. She flourished on screen, portrayed as a welcome equal in our eyes. In Creed 2 however, there is a significant reduction in depth of her characterisation. Her vocation is referenced and she performs twice, but the role of mother and supportive wife take precedence. It wasn’t intentional but it was certainly a noticeable change from the original.

It was disappointing to see Stallone take a back seat in Creed 2. He’d taken a dignified supporting part in the original, dishing out playful one liners in order to supplant just the right dose of comic relief. Stallone’s input was noticeably stripped back, transferring the majority of screen time to Michael B. Jordan, a capable and commanding actor, but lacking the raw depiction of a boxer’s strife which Stallone epitomises.

There are hearty family references throughout, Adonis grappling with the Creed legacy, Rocky intent on making amends with his son (Milo Ventimiglia) and the Drago men seeking approval and recognition from a recently departed wife and mother figure. It is this melancholic tone which fuels the fire of the characters and is a welcome backbone and fulcrum around which the sequel’s script revolves.

In the interest of fairness, it is worth noting that boxing movies can only go in two directions (win or lose), but it is the peaks and troughs in the interim where the magic appears and Caple Jr. certainly delivers on the animalistic determination of a fighter dealing with these ups and downs. Rocky has had his time to tell his story, (many times – in fact six times), and the Creed franchise has dignifiedly accepted the limelight. But while Creed 2 had heart, its predecessor possessed the soul. Opportunities remain for numerous subsequent sequels, but I would hope that the Creed franchise treads carefully to ensure it does not sell it’s soul as frivolously as Rocky once did.