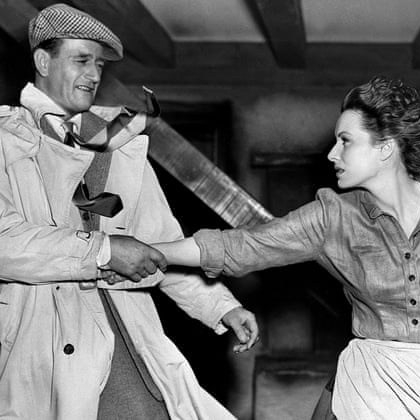 No other country in the world has an entire national holiday, celebrated the world over like Ireland. For such a tiny nation, we’ve had an incredible impact on the the world, particularly in the realm of culture. There’s something uniquely distinctive about hearing an Irish brogue on screen, I always find myself leaning in closer to hear what the soft musings from an Irish accent will be. That’s because our dialogue is special, with storytelling running through our veins it’s no wonder that we phrase anecdotes and tell a yarn unlike any other nation. This St. Patrick’s Day, I take a look at some of the most wonderful Irish tales on the big screen.

A staple Irish film that appeals to the anti-Crown animosity that was so ripe during the Troubles, Jim Sheridan’s 1993 classic In the Name of the Father still manages to stir up these emotions every time it airs. From the get-go we are transported back to troubled times in 1970s Belfast, watching Daniel Day Lewis thrive in his Oscar-nominated role.

He plays Gerry Conlon, an innocent Irishman who unfortunately happened to be larking about in London when the Guildford pub was mercilessly obliterated by the IRA. His very presence in London was enough for the policemen tasked with finding the perpetrators and this set in motion one of the greatest political injustices of our time, as Conlon and three other acquaintances were sentenced to 30 years for a crime they didn’t commit. Even Conlon’s father, his aunt (who made sausages and a decent fry) and her own young sons were sentenced due to the blundering incompetence of the police who surmised that they had all hidden out in ‘Auntie Annie’s bomb-making factory.’

Daniel Day Lewis gives a stellar performance as Gerry Conlon, and he shines alongside the late Pete Postlethwaite, his innocent and ailing father Giuseppe Conlon. The story of the Guildford Four resonates because of the incredulous injustice that played out cruelly not so long ago. In many ways it brings the Brexit row into a modern context, as the Guildford Four were at the receiving end of the police vilifying a particular cohort, whilst in pursuit of comfort and security for their nation. At one time the Irish were the reason behind much anxiety in British life, similar to how the perceived immigration issue spurned the narrow-minded Brexit vote.

In the Name of the Father is a modern fable of an innocent man determined to stand up against an establishment which believes it has all the answers. At the end, Conlon has his say after the acquittal, ‘I will fight on, in the name of my father and of the truth.’ Although justice can seem unattainable at times, the messy Brexit vote playing out right now demonstrates how even the British Empire can get it so wrong.

The Secret Scripture is an unusual addition to this list in that it is not a perfect film, but it has considerable heart. It documents a woman’s final hours in a Sligo psychiatric hospital which is moving to another premises, an environment she has inhabited for 40 years. Vanessa Redgrave is the institutionalized Rose McNulty, desperately clinging to her bible where she has clandestinely recorded her thoughts over the years amidst the scripture. Scrawlings of “I did not kill my baby” rest in the margins and in between prose. Eric Bana is called in as Dr. Grene to assess Rose’s state of mind, in the absence of any family members to help relocate her. Susan Lynch and Bana remain as nurse and doctor at her bedside as she recounts her life that confined her to this hospital.

From this point, intermittent flashbacks to 1940s Ireland guide the story with Rooney Mara portraying the young Rose. Mara proves a dab hand at the Irish accent, slotting into the suppressed landscape of old Ireland quite smoothly. Having just moved from Belfast to her mother’s town of Ballyterbin, an aunt sets her up as a waitress in the family’s cafe. Rose strikes up a relationship with Michael McNulty (Jack Reynor), known to be imminently heading to war as a fighter pilot. In addition to this, a sinister dynamic with the local priest ensues, however accompanied with little context. Both lines of enquiry between the two men pursuing Rose, are quickly scuppered by none other than Tom Vaughan Lawlor (Nidge from Love/Hate) and his gang, threatening Rose to ditch the priest and the British soldier. Brash, Republican intimidations are made with the weapon of choice, a hurley. It’s not that Rose deliberately goes after trouble or hardship, but it seems to always find her. The story aptly demonstrates the vices of a small parish, with scorned individuals undermining the flourishing of youth that had kept Ireland in the dark for so long.

Although its story lacks in some respects, the heart is there and The Secret Scripture’s cast is impeccable, an ensemble of Ireland’s most talented and loyal outsiders such as Mara and Bana who act with pitch perfect dialects – there’s no trace of a Julia Roberts butchered Kerry accent here.

In retrospect, The Quiet Man can be viewed as one of the most incredulous early pieces of Ireland on screen. At some point in the 1950’s, someone had to have approached one of the leading studio heads in Hollywood to announce their intention to cast none other than John Wayne as Maureen O’Hara’s love interest in a tale about a Pittsburgh prize fighter returning to his birthplace of rural Ireland. In the end however, somehow it worked.

My connection with The Quiet Man is interesting, in that I’d seen the most famous scene before.  Through the prism of ET’s eyes, as Spielberg had juxtaposed Elliot’s rebellious tirade against this windswept, cinematic moment. In an odd dichotomy, Wayne looked equally alien and right at home in that cottage as he valiantly took Maureen O’Hara into his arms and embraced her in a silence that was hampered only by the squeals of the wind.

What I admire most is that all the signs were pointing to the possibility that it could have been a complete, stereotypical disaster. With John Ford as director and a band of gorgeous Abbey Theatre stalwarts, he reigns John Wayne in to excavate his sensitive side and lets O’Hara thrive in her fiery performance. It’s a gorgeous token, a breathtaking view of rural Ireland in vibrant technicolour and continues to stand out as one of the classics in which John Wayne, the epitome of American brashness, hung up his cowboy boots in favour of a gentler, more subtle piece suited to the rhythm of Ireland.

It was dubbed the millennial generation’s answer to The Commitments when it hit our screens in 2016. John Carney took the reigns of this just like he did with his acclaimed romantic drama, Once. It tells the story of a young Conor, his parents embroiled in domestic and financial woes in the 1980’s, who decide on the ultimate cost-cutting sacrifice – the relocation of their youngest from his private Jesuit institute to a rough-and-tumble Christian Brothers school.

Reluctantly, he begins classes at Synge Street. A name like Conor Lawlor doesn’t slip by unnoticed with its unfortunate overloading of vowels, and when he introduces himself during roll call, the South Dublin accent only escalates the ridicule and isolation. Jack Reynor excels in dispensing advice as the brash, but Yoda-like, Brendan, Conor’s older brother. His full-time occupation as a college dropout leaves him with infinite hours from which to artfully sculpt his younger brother’s music taste as they drool over the creme de la creme of 1980s television, Top of the Pops. When Conor spots Raphina (Lucy Boynton), the elusive model, on a set of Georgian steps, he’s resolved to have her appear in one of his band’s music videos.

Following a string of amateur music videos in back alleys and on Dun Laoghaire pier, Conor heads a pack of misfits, reincarnated as lead singer, Cosmo. Their overall perennial determination to beat the institution and perform at the end of term disco, coupled with Cosmo’s unbridled affection for the flighty Raphina makes for a great platform to witness a crowd of youngsters blundering their way through life. From a crop of kids where most don’t look a day older than their first holy communion, a talented Irish ensemble cast assembles to tell this sweet tale.

Many people slip through life having never sat through this epic film, and perhaps its the incongruent title (named for a 1960’s pop song) that may have meant that it has been overlooked. It tells the story of a group of IRA members who kidnap a British soldier, played with resounding cadence by Forest Whitaker. Stephen Rea is the curious kidnapper, tasked with watching over their new hostage. Rea goes a step further however, as he can’t help himself but be taken in by Whitaker’s words, his yearnings for his life back in London with his girlfriend, who in time Rea seeks out.

Neil Jordan sent the world into a tailspin in 1992 with The Crying Game, his revolutionary script ultimately winning Best Original Screenplay at the Academy Awards that year. It’s still a colloquial reference point for when a TV show or film has an almighty twist that the audience didn’t see coming, ‘…with a twist that would rival The Crying Game,’ is when you know it’s good. I’d never dare to spoil the details of the twist for anyone yet to watch it, but Jordan was ahead of his time in how he handled the genesis of the idea and how the characters ultimately deal with the fallout.

It’s the incomparable Dublin humour of the restless 1980’s that Roddy Doyle so eloquently captured in his novel that was adapted into a film, directed by the acclaimed Alan Parker.

The essence of Dublin was epitomized in Jimmy Rabbitte’s musings, the lovable protagonist. Jimmy is a proud Northsider, who fancies himself as a Brian Epstein type figure, resolved in his quest to start a Dublin soul band. He rounds up the gang, including Deco, the cocky bus conductor with the most soulful voice and disagreeable manners. Jimmy recruits a few of the girls as backing singers, who have to be told on more than one occasion that it’s ‘ride Sally, ride,’ not ‘riiiode, Sally, riiiode.’ The Commitments are nearly complete, they just need an apparition like Joey ‘the Lips’ Fagan who arrives on his Suzuki to save Dublin’s soul.

What I love most about Irish prose is the underlying sense of being the underdog. Whether we’re pulling together to start a crappy band, or effing and blinding with indignation at the injustice of the British legal system, we do it with character. For years we’ve been the underdogs, the little fella on the most Western point in Europe, but as these works of art show, we’re far mightier than we think.