Many punters have observed recently that movies have a much longer running time than they used to. But apart from the outliers and marathons like Once Upon a Time in Hollywood, is there really a trend that shows lengthened running times? Despite the hearsay consensus of increasing duration times, incredibly, the data doesn’t support it. The assumption that movies are getting perniciously longer as each year goes by appears to be only in our heads.

Dr. Randal Olson, an expert on data visualization reviewed duration times on IMDB since the 1930’s and found that studios upped their run times in the 1950’s and 1960’s to starve off the competition from television and encourage audiences to come to theatres. This upward trend was reversed (by an average reduction of 10 minutes) up until the 1980’s and since that time, duration lengths have only returned to the original status quo set by studios in the 1960’s: they haven’t lengthened at all. 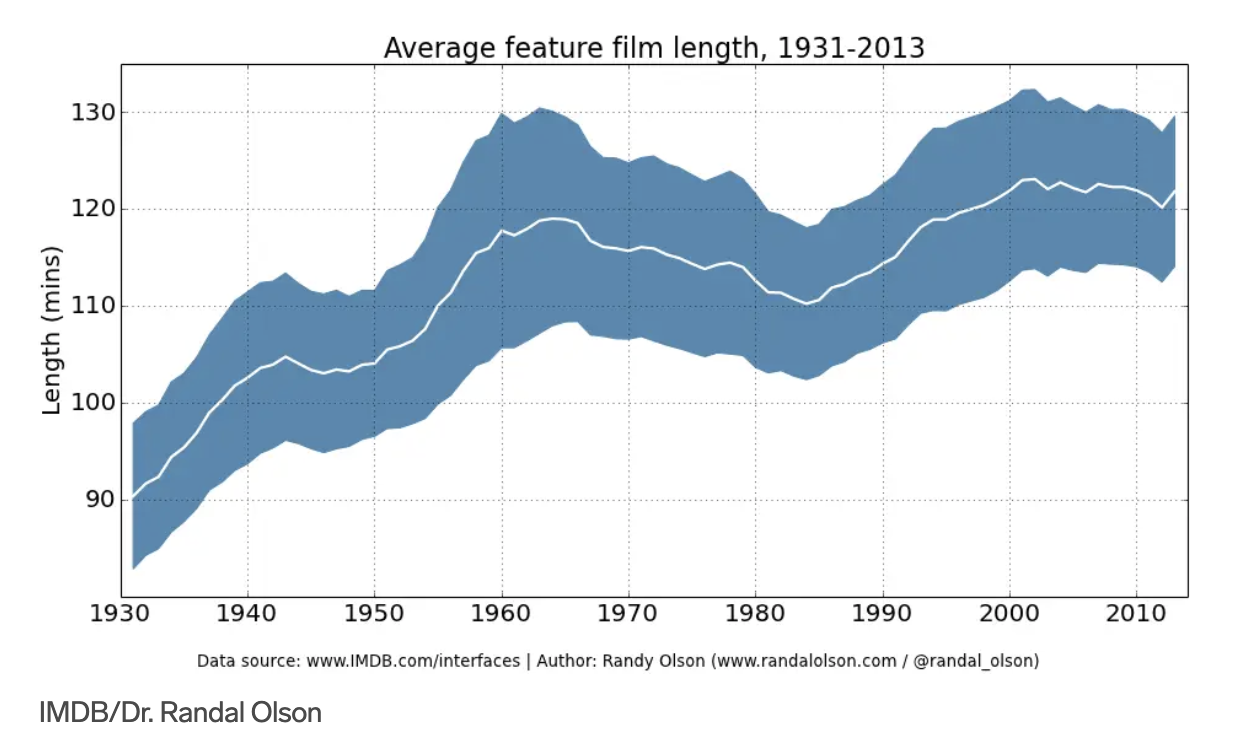 There has to be a reason why longer run times are being picked on, and that reason may be because those well-versed in the film world tend to veer towards elite, top tier movies that usually get hooked as Oscar bait. Rolling Stone’s most infamous film critic Peter Travers noted how films destined to be of Academy status generally exceed the 2 hour mark as they believe it to be a key requirement to be taken seriously in-competition. ‘Hollywood studios believe movies are weighed by the pound when it comes to Academy thinking. If it ain’t long, it ain’t winning.‘

Although the data tells us otherwise, this is a creative medium and some sentiments like lamenting the length of movies truly cannot be measured. Perhaps this complaint is a symptom of another problem, a result of our new environment during the pandemic with the increase in streaming services. The observation has likely been exacerbated by the closure of cinemas and the push to watching films at home and on a variety of devices, many of which do not contribute positively to the overall viewing experience. Generally, the sound of a first generation LG TV is sub par at best and this is only one of many aspects of the cinema experience that can’t be replicated as well in the home.

When theatres closed, people were forced to make use of their streaming services to be entertained, across devices, at any time and anywhere. Many of us have become experts in multi-tasking, watching films and TV shows while scrolling, cleaning, and making food; things we tend to be scolded for if we were to do the same in a cinema. A wonderful self indulgent landscape shot simply can’t be observed or appreciated properly in a kitchen as it would in a darkened cinema. The filmmaker didn’t intend for his or her film to be seen on a six inch screen while a stir fry sizzles beside it.

Roman Polanski once said that ‘cinema should make you forget you are sitting in a theater,’ and he’s not wrong; there hasn’t been one time that I have streamed a movie and forgot I was sitting in my living room. It can’t be replicated, and the fact that we’re feeling the effects of this on our movie-viewing experience says a lot about what we’re missing out on. Given the new environment we find ourselves in, it seems like longer, top-tier movies should be reserved for theatre-showings only where they can be truly appreciated. Maybe we don’t want shorter movies, maybe we just want to watch movies like they were intended to be seen.